Spare crabapples in your back garden? Turn your hand to homemade preserve making with this scrumptious & traditional Crabapple Jelly recipe.

Ingredients for the jelly:
For each litre of juice use:-
1kg raw cane sugar
25ml fresh lemon juice

Method
Check the crabapples to ensure they’re bug and bruise free. Chop roughly into halves or quarters if they’re big crabapples. Put in a large pan and cover with the water. Bring to the boil, cover and simmer for 20 minutes until the apples have turned to mush. Remove from the heat and pour through a jelly bag or doubled over muslin over a pan or measuring jug. Leave untouched for a minimum of three hours or until all the juice has strained through under its own weight and don’t be tempted to squeeze or push the mash through if you want a beautifully clear jelly.

When you return to your muslin you should have about a litre of beautifully pale pink juice scenting your kitchen. Put a saucer in the fridge for the setting point test. Measure out an equal weight of sugar to juice and put them both into a preserving pan and heat gently, stirring constantly until all the sugar has dissolved then bring to a rolling boil. Add the lemon juice and bring back to a rolling boil stirring occasionally.

Boil the mixture until the set point is reached, usually about 20 mins. Remove the pan from the heat, skim off any scum that has risen to the surface and test for a set.

To test the jelly, drop half a teaspoonful onto a cold saucer, count to ten and push with your finger. If it wrinkles then the setting point has been reached. If it doesn’t wrinkle, return to the boil and test again in a couple of minutes.
Once the jelly has reached setting point put it into jars straightaway and lid. 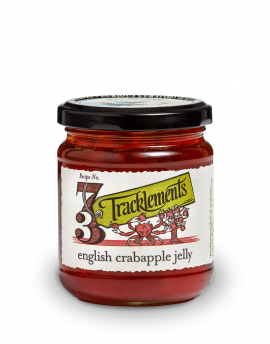 Trackle-fact: When chewed yellow mustard seed gives a warm, peppery flavour while brown mustard seed goes up your nose
Shop
Submenu
0 Basket
My account
Scroll To Top
We use cookies to improve your experience on our website. By browsing this website, you agree to our use of cookies.
Accept